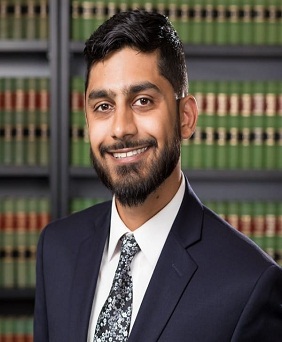 Attorney Arij Syed received his Juris Doctorate from Rutgers Law School in 2017 and his Bachelor’s of Arts in History and Political Science from Kean University in 2013. He is licensed to practice law in the State of New Jersey and is admitted to the United States District Court for New Jersey.

Arij H. Syed has dedicated his career to resolving cases involving civil, family, and financial matters in the most time and cost-efficient manner. He has experience working with a dynamic set of clients, from the indigent to the high profile and understands that his clients face unique hardships when they come to him for help.

During law school Mr. Syed was a Phillip J. Levin Scholar and served as the President of the Rutgers University Chapter of the National Lawyer’s Guild.

While studying law he also interned with the American Civil Liberties Union of New Jersey where he worked on constitutional law matters including the first amendment, juvenile detention, and civil liberties.

After graduating from Rutgers Law School, Mr. Syed clerked in the Superior Court of New Jersey for the Honorable Judge Bahir Kamil in Essex County. Prior to starting his own practice, Arij was an associate attorney at Orlovsky, Moody, Schaaff & Conlon. Additionally, he had the opportunity to hone his litigation skills at the Williams Law Group, a boutique firm in Short Hills, NJ.